Colour genetics in the PRE 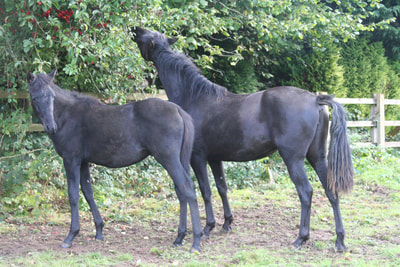 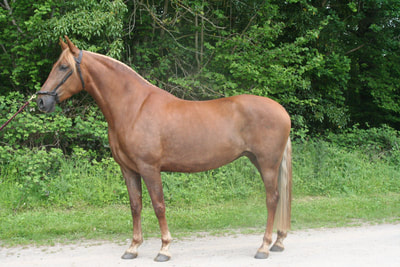 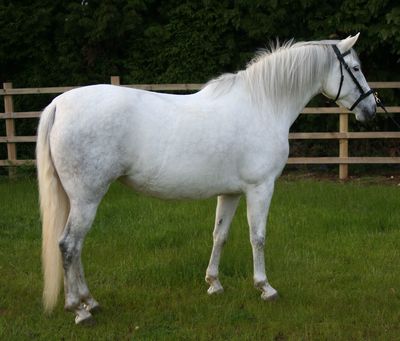 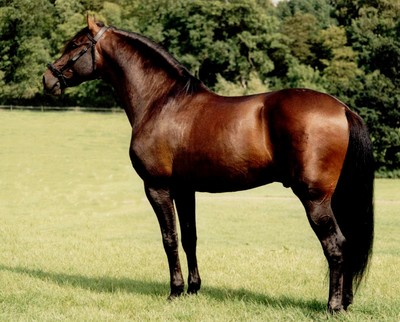 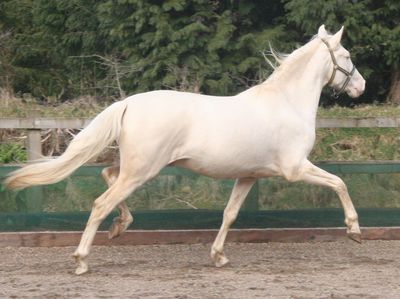 Buckskin - E?A?CrC
Until very recently, the only colours that were acceptable to the PRE Studbook in Spain were black, bay and grey. Colours such as chestnut, palomino, buckskin, etc., were not allowed to be registered. However, the more exotic colours were much favoured by Royalty in earlier centuries and the genes for producing these colours and patterns have persisted down the generations, hidden by the dominant grey gene. Recent advances in genetics have started to unravel which genes are responsible for the various colours and patterns and there is renewed interest in breeding PREs of the Royal lines. However, the genetic knowledge is still incomplete and not all colour patterns are fully understood. Spots, piebald and skewbald patterns are still not allowed in the PRE and horses with white faces or white legs are also disqualified.
What we know:
There are two basic coat colour pigments: black and red. Black is the dominant colour and identified by the gene 'E'; the red gene is recessive to black and expressed as 'e' . A horse will appear black if it has the genotype 'EE' or 'Ee'; a chestnut horse will always be 'ee'.
The greying gene, 'G', is dominant to all others, so any horse with the genotype 'GG' or 'Gg' will go grey. Strictly, grey is not a colour but a gene that prevents colour pigment from entering the hair. It is a progressive effect and over time these horses all become white. These horses have black skin and normal dark pigmented eyes (cf cremellos & perlinos).
In addition to the basic colours, there are several genes that dilute the basic colours. The cream gene 'Cr' in its single form 'washes out' only red pigment, so bays become buckskin and chestnut becomes palomino. The double form, 'CrCr', dilutes all colour, so the horse appears a pale cream (Cremello if on a chestnut horse or Perlino if on a bay horse). These horses have pink skin and blue or pale amber eyes. The Dun gene ('D') is similar in effect to the 'Cr' gene but affects both red and black pigment equally - but not at the points. In the PRE, the Dun gene (D) appears to be quite unusual and the dun appearance of some horses appears to be attributable to non-dun genes (ND1 & ND2). No doubt a greater understanding of these genes will emerge in the next few years. The Dun and Cream genes are not the only dilution genes; other dilution genes exist in horses (silver, pearl, champagne) that have a variety of effects on the coat colour but only the Pearl gene has been shown to exist in the PRE breed.
Finally, there are the 'pattern' genes. The most common is the agouti gene and like most of the pattern genes it is a dominant. The agouti gene 'A', has the effect of restricting black pigment to the points, so a horse with the genotypes 'EEAA', 'EeAA', 'EEAa' and 'EeAa' will all appear bay. The agouti gene has no effect in a chestnut horse as there is no black pigment present.
Genetic typing is possible for most of the genes, making it possible to predict the possible colour of the offspring if the genetic configuration of both parents is known.
​