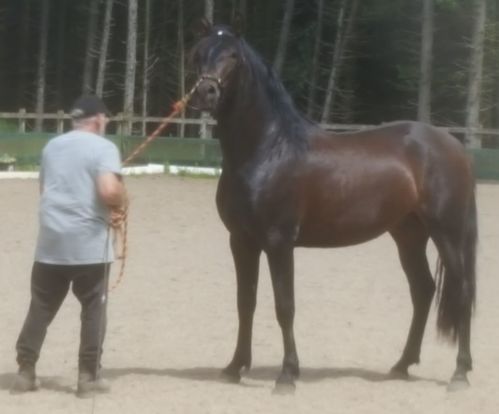 Graded August 2018
We took him to the GBPRE National Show in 2018 where he gained a first and a third rosette. We were delighted as this was his first ever show and the very first time he had been on a lorry and away from home.
He stands 157cms tall (15.2hh) and at only three years old we expect him to be at least 15.3hh – 16hh at maturity. He has that ‘look at me’ quality and would stand out in a crowd, but he is kind, very quick to learn and wants to please. He should be well suited to dressage and has two half-brothers already competing at Grand Prix and PSG.

His dam, Borrascosa IV,is one of our most successful brood mares producing foals with great potential for showing and dressage. Her foals by Romero are simply spectacular. Her pedigree is impeccable containing many old and respected studs.

His Sire, Romero XXV ,has had an unrivalled show career. He has been twice UK National Stallion Champion, UK Supreme Champion, UK Movement Champion, UK Veteran in-hand Champion, UK Veteran Ridden Champion and he has been Best in Show (mostly ‘All Breed’ shows) more than 15 times. His offspring have done him proud, several have been young stock and movement winners at the UK National Breed Show. In dressage he has offspring competing and winning at PSG and Inter 11 with one going GP this year another one competes internationally at 'Skill at Arms'.

Tabanus is good with the farrier, loads well, and has been trained in-hand for showing Spanish Style. He is a quick learner, tries to please but always has that presence which turns heads and sets him apart from others. He has been lunged with a saddle but as he is only rising four, he is not yet backed. Tabanus shows all the talent,intelligence and showmanship to follow in the footsteps of his well-known sire and we hope he will find a home with someone able to take him to the top in both the dressage world and in the show ring.

G Tabanus went to his new home in 2019
​
Not available